Kruger named 2020 AG-ceptional woman of the year at Northeast 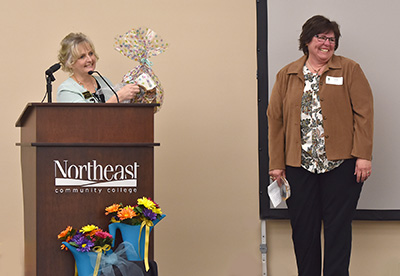 NORFOLK, Neb. – A Columbus woman has been recognized for her contributions to agriculture. Lisa Kruger was honored as the AG-ceptional Woman of the Year at the 12th Annual Northeast Community College AG-ceptional Women’s Conference on Friday at the Lifelong Learning Center in Norfolk.

The announcement was made during a video tribute that was played during the opening session of the 12th annual conference. The video was sponsored by Farm Credit Services of America and produced by District 25 Productions.

The AG-ceptional Women’s Conference - northeast Nebraska’s premier event for women in agriculture - is typically held each November, but the COVID-19 pandemic postponed the event that was originally scheduled last fall.

“Lisa is a very strong representative for women in agriculture,” said Corinne Morris, dean of Agriculture, Math and Science at Northeast. “She has demonstrated leadership and competency in every aspect of her agricultural life - from her early involvement in FFA and livestock judging to her current position as an accomplished cattle buyer for Cargill. Her commitment to excellence is evident through her dedication and service to her family operation, her community, her profession and the industry.”

Kruger is a graduate of Northeast Community College where she earned an Associate of Science degree in Livestock Production. She was also a member of the College’s Livestock judging team under Jerome Settles. Following her graduation, she worked at the Norfolk Sale Barn and later transferred to Texas A&M University where she graduated with a Bachelor of Science degree in Animal Science. She received a Houston Livestock Show & Rodeo Scholarship and was a member of the A&M’s Livestock judging team that earned the reserve national championship.

Kruger said her time on the livestock judging teams at Northeast and Texas A & M have served her well to this day.

“I feel that judging experience prepared me for this position, even though when I was judging I had no idea this is where the road was going to take me,” Kruger said. … “After college, I knew I wanted to be in the beef business,” Kruger said. “So, I interviewed for positions in pharmaceutical sales and breed associations. IBP was a major player in the beef business and I felt this was a good place to start.”

In 1999, IBP sent her to Missouri to buy cattle covering three-quarters of the state and four counties in Illinois. In 2006, she began working for Cargill as a cattle buyer in Mitchell, So. Dak., where she covered the eastern third of the state and also worked in North Dakota.

Two years later, Kruger became Cargill’s plant cattle buyer in Columbus where her duties include serving as the cattle buyer representative at the company’s facility in Schuyler where she represents 10-12 cattle buyers who send cattle to the plant. In addition, one of her duties is to line up feed yard tours for beef customers and employees who have never been to a feed yard.

In 2010, Cargill presented Kruger its Cattle Procurement Bronc Davis Award named after a Cargill cattle buyer who lost his battle with colon cancer. The trophy symbolizes what Davis represented in the eyes of his peers - hard work, a positive attitude, a never give up philosophy, being innovative as well as civic minded, and maintaining a desire to help fellow employees. She was the first female to receive this award.

Marcine Moldenhauer, a former cattle buyer for Cargill and the first female cattle buyer for a major packing company, said it’s important for women like Kruger to play a role in the industry.

“We’re trying to blaze a trail for other young women who have interest in cattle, an interest in this profession. We want to make sure we lay the trail for them to have an easier path and pioneer through breaking that stigma that women can’t evaluate cattle or can’t negotiate as tough as a man,” Moldenhauer said.

Her father, Gerald Kruger, said his daughter has proved her worth in the cattle industry.

“She has been accepted very well working in a man’s world and I think she’s doing a good job of it. I don’t mind taking advice from my daughter. She knows what’s going on in the cattle market a little better than I do.”

Kruger has continued to return home to the family farm east of Pierce to help during harvest and work feeder cattle. She said that is her way to relax and get away from her cell phone. In addition, she has two horses at the farm, Baron and Rushmore, and rides regularly. Her other hobbies include tennis, golf, and bowling. She also does some photography work, senior pictures, weddings and family photos, as well as wildlife photography. She also enjoys traveling with her friends seeing the country.

Kruger has also been active in FFA. She said the organization gave her skills to step up and go after what she wanted in life.

“It also gave me the communication abilities that are needed to promote beef and be able to communicate with farmers and ranchers as well as marketing skills to negotiate with the feedlots on their cattle. As the industry has changed and things have started to rely more on people skills rather than just knowledge of cattle/beef, I believe my years in FFA helped me to make that transition.”

In accepting the Ag-ceptional Woman of the Year honor, Kruger told the women in attendance that agriculture is a rapidly changing industry, but with change comes opportunities.

“There’s opportunity everywhere right now in agriculture. … “I hope my story can influence you in all of your ideas and passions and don’t be afraid to take the road less traveled like I did,” she said. “Don’t let anyone tell you can’t do anything because you’re a woman or your too young or your too old, for that matter.”

Kruger is the daughter of Gerald and Judy Kruger of Randolph. She has one sister, Michelle Meier, and her husband, John, a retired U.S. Air Force pilot, and nieces, Katrina, a sophomore at the University of Nebraska-Omaha majoring in engineering, and Abigail, a senior at Pierce High School, and a nephew, Alexander, a sophomore at Pierce High School.

“Lisa's story is inspiring,” Morris said. “She is a true role model for women who aspire to achieve success in agricultural careers.”

Corinne Morris, dean of Agriculture, Math and Science at Northeast Community College, (left) shares a laugh with Lisa Kruger, Columbus, as she is presented the 2020 AG-ceptional Woman of the Year award and a gift basket that contains three bottles of Kruger’s favorite condiment –  ketchup. The award was presented during the College’s 12th annual AG-ceptional Women’s Conference on Friday.