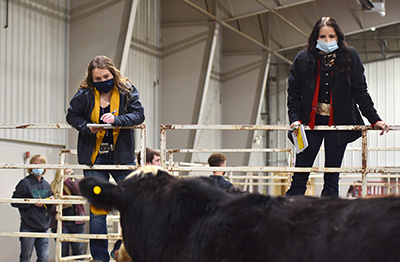 NORFOLK, Neb. – The Chuck M. Pohlman Agriculture Complex at Northeast Community College in Norfolk was the site of the District II, III, and IV FFA District Livestock Judging Contest recently. Five-hundred-twenty contestants from 46 schools participated in the event held over three-days this year.

Michael Roeber, agriculture/livestock judging instructor at Northeast, said several changes were made this year due to the pandemic.

“In order to limit numbers in the facility at a given time, each of the three districts participated on separate days, with District 2 competing on Thur., Jan. 28, District 3 on Tue., Feb. 2, and District 4 on Thur., Feb. 4.  The District 4 contest also had to deal with late starts by many schools due to the snow and wind taking place,” he said. “Additional pandemic protocols included each school being assigned a time to begin their competition, with team members from a school being kept together in their own group away from contestants from other schools.”

Teams could have up to eight members, with the top four scores counted. Roeber said the top 25% in each division in each district qualify for the State Livestock Evaluation contest, which will be held virtually on April 1st, with the state results being announced the following week during the virtual Nebraska State FFA Convention.

There were approximately 25 faculty members, staff and students from Northeast Community College who assisted in conducting the contest.

Individual and team results include:

Two contestants evaluate a class of cattle at Northeast Community College recently. They were among 520 students from 46 area high schools who participated in the annual District II, III, and IV FFA District Livestock Judging Contest recently at the College’s Chuck M. Pohlman Agriculture Complex in Norfolk.