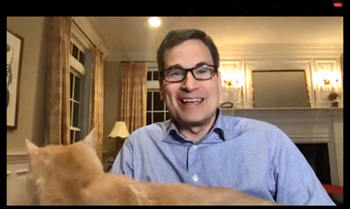 NORFOLK, Neb. – Climate change and keeping pizza hot do have a few things in common. Scientists and engineers are working on ways to make each better for the planet – although a hot pizza may be a stretch. “If you think science is this weird, isolated nerdy thing that holds no use or promise for you, well boy do I have a story for you,” said David Pogue, author, New York Times columnist, and “CBS Sunday Morning” correspondent, as he began speaking to students in two Northeast Community College biology classes recently.

Pogue was invited to address approximately 30 students by their instructor, Curtis Reese. Reese said he reached out to several people in the science community over the past few months to speak to his classes since most are being held virtually during the pandemic.

“I thought I wouldn’t hear back from any of them, but all of them responded to me,” Reese said. “Two of them politely said no and that they were too busy, but David said he would do it. You never know what’s going to happen unless you ask.”

“Hey, how yah doing, Curtis! Nice to meet you, man,” Pogue said when he initially Zoomed in. “Thank you for requiring all of your students to show up.”

Pogue, who had the cover stories on the CBS newsmagazine over the past two Sundays, has family ties to Nebraska - both of his grandparents hailed from the Cornhusker State.

“Ich bin ein Nebraskan,” Pogue said demonstrating a play on a phrase President Kennedy uttered in a speech in West Berlin in 1963, and probably went over the heads of most of the students.

“I really got more and more interested in how the world works and it turns out that it’s pretty cool, he said. “Anything that seems like magic, but is really science and is predictable, measurable, and useful – I love that stuff.”

Pogue was writing a technology column for the New York Times when the National Science Foundation (NSF) provided a $3 million grant to PBS in 2001 to develop a mini-series on material science, which he called the “most boring field of science” in existence. Material science is the study of molecules and atoms and their effect on macroscopic properties.

PBS executives shelved the project thinking that it still may happen one day. In 2010, Pogue said the NSF told PBS if it isn’t going to develop the show, it wanted its funding back, which saw the educational television network look for a way to get it developed.

“PBS’s rationalization of the premise of the show was that they would develop the program with a host who is not a scientist who would interview scientists and put the host in extreme situations,” he said.

Pogue spent the better part of the hour talking about what he discovered during the filming of NOVA including episodes such as Hunting the Elements and Making Stuff Cleaner. One installment focused on the strength of metal that featured Pogue in a demolition derby while he was not wearing a seatbelt. Another on the properties of shark skin had him swimming with eleven-foot sharks, which was the most terrifying, but another offered the most gratifying experience for him – a show that focused on the shape of bird feathers that was demonstrated through hang gliding.

He humorously described another episode that included scientists placing two electrodes up his nose.

“They would release the smell of peanut butter and then give me this powerful shock in my nose. The idea was that they could teach my brain to not like peanut butter anymore by giving me a shock every time I smelled it. Uh, it didn’t work and the episode didn’t air.”

He also filmed an experiment that showcases that 2-6% of humans’ DNA is Neanderthal.

“I personally turn out to be 4% Neanderthal,” Pogue said dryly. “And, I use that as my excuse when I leave my underwear on the floor - and my wife is not pleased.”

In that particular NOVA broadcast, Hollywood special effects experts made him up as a Neanderthal. After seven-hours in the make-up chair, he walked down the streets of San Francisco to get people’s reactions.

“As you can probably guess there weren’t any. It was more like, ‘Oh, there’s a guy dressed like a Neanderthal.’”

When it comes to technology, Pogue had the opportunity to review the first iPhone in 2007. He said no one had ever seen anything like it. It was a phone without buttons and it had very little of the technology that exists on today’s smartphones.

At the time, he was writing a column for the Times and was afforded an opportunity by Apple to be one of four people to review the new device.

“It was a really precious thing that I had. I got to write about it and play with it for 10-days before the public got their hands on it.

Things were fine until the phone left his own hands.

“I was in a cab,” he explained, “and I was really tired and it was so shiny; it slipped out of my pocket into the backseat of the cab. And so, I wound up losing only one of four iPhones in the world.”

He was, however, able to track down the cab.

“The cab driver had no idea what it was. He said, “Here’s your pager, buddy!’”

Pogue did speak at length on two additional topics that are often in the news that students asked him to respond to – robotics and climate change.

Pogue said people are scared about robots taking people’s jobs, including that of his own. He cited how artificial intelligence (AI) is now writing sports and finance stories. Robots are fed basic facts, such as scores from a game and who had the most points, among other information, and then create a story.

Pogue said it has been explained to him that a robot can probably take over any type of repetitive job by simply watching someone do a task over the course of a day. But, there are many occupations that AI and robots will have trouble with for now.

“And those are jobs that require you to be human – anything with compassion, empathy, reasoning, imagination,” Pogue said.” But, no one knows in particular what’s going to happen. And frankly, they have been predicting this robot doomsday for many years and it really hasn’t totally happened yet.”

More robots are being utilized in the food service industry. Pogue spoke of a pizzeria in California that converted its operation to robots – from creating the ball of dough to making the pizza. However, it’s what came next that impressed him.

“They don’t cook (the pizza) until it’s in the truck and on its way to a customer. The artificial intelligence knows when to turn the oven on in the truck, so by the time it reaches the customer when they pull up – ‘ding,’ the timer’s done, the pizza is finished.”

The pizzeria opened up additional stores, but Pogue said the pandemic hit and the operation closed its business.

On climate change, Pogue mentioned several examples of companies working to address the crisis. One of which is the use of thermosyphons in Fairbanks, AK, which has been experiencing a melting of the permafrost in the region. Thermosyphons draw heat out of the ground using vacuum-sealed tubes. He said there are other companies that are presently manufacturing additional large machinery that can suck carbon dioxide out of the air and bury it underground.

In his upcoming book, How to Prepare for Climate Change, Pogue said he doesn’t take a stand on if climate change is human-made or natural, but “the earth is definitely way hotter – the oceans are hotter, the air is hotter – than at any time in 12,000 years.”

In response to a student’s question, Pogue said it’s too late to stop climate change. He explained that 93% of the heat from global warming is in the oceans and it will take another 30-to-40-years before that changes.

Pogue is a five-time Emmy Award winner and one of the world’s best-selling “how-to” authors, with more than 100 titles and three-million copies in print. He said he is proud of his work and enjoys helping explain complex scientific matters in ways that most people can understand.

(On NOVA), we take something that’s inherently boring and try to illustrate it in the most vivid possible way; the most telegenic, exciting way possible. And they do a pretty good job.”

The original series on material science earned the highest ratings in NOVA’s seven-year run up to that point. Pogue said that came as a surprise because everyone felt it was, as he describes it, “This dog of a show that nobody would watch.”

To learn more about Pogue, go online to davidpogue.com.