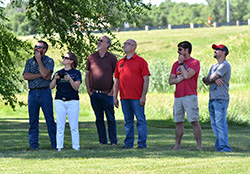 NORFOLK, Neb. – Students in a class held at Northeast Community College recently had to the opportunity to soar to new heights. One of the students, Craig Korth, said the course he enrolled in was an eye-opening experience as to what it takes to fly drones commercially. “The class turned out to be more in depth than what I was expecting,” Korth said.

Korth, a realtor with Real Estate Solutions Team, took the class with the intention of learning the rules and regulations of operating a drone, or an unmanned aviation system (UAS), in marketing real estate property the company is selling.

Drones are becoming a vital part of the business world. Cameras on the relatively small flying robots are capturing still images, video, and even 360-degree panoramas of the earth below. The UAS may also be used to inspect buildings, communication and utility towers, inspect for damage to areas and structures in hard to reach places, fly over disaster location sites, and mapping, among others.

Korth, and his wife, Penny, who also took the class, have also been able to use a drone on their farm.

“Whether that be checking fences or counting cows in the pasture, the options are endless.”

The statistics tell the story of their popularity. The Federal Aviation Administration (FAA) reports over 1.5 million drones have been registered through the agency, with most being used for recreational purposes while approximately 400,000 are used for commercial use. Over 171,000 remote pilots have been certified.

Brian Anderson, media arts - broadcasting instructor at Northeast Community College, said it is important to note that the commercial use of drones is regulated.

“If you fly a drone in the United States, it’s your responsibility as a pilot to understand and abide by the rules, especially if you’re going to be flying it for commercial ventures,” Anderson said. “If you make money off how you use your drone, such as selling photos you take with it, you have to be certified and know the rules of the air.”

A drone can range in size from less than a half-pound that can sit in the palm of one’s hand to super-sized drones that may be fixed-wing and as large as a bus. Northeast has a fleet of DJI’s, which are durable drones with powerful motors, a global positioning system that locks on to 16 different satellites, and cameras.

The course also delivered a better understanding of the rules of flying a UAS as established by the FAA. Anderson said the course was designed for those who want to fly drones for commercial purposes, but also included useful rules and information for the drone hobbyist.

“It helped participants understand the proper protocol and procedures for flying various drone missions through hands-on flight training. Ultimately, it prepares these students for the successful completion of the FAA Part 107 UAS Remote Pilot certification process,“ he said.

Korth said the class demonstrated the different air classifications and what elevations an operator can and cannot fly a drone.

“This was especially important to know because Norfolk itself is within a certain distance of the airport which requires prior approval before flying. Norfolk is primarily where we deal in real-estate, so this was an important fact to know along with the process to follow in order to fly a drone,” Korth said. “Brian was able to cover a lot of material while giving firsthand experiences of operating a drone.”

The course also consisted of class time that primarily focused on rules and regulations with additional time set aside for students to actually operate the drones.

Anderson has also created a drone operations manual which includes protocols on what an individual needs to take care of before a UAS is launched. The manual includes logs and procedures as well as information on flight information and what do if something goes wrong.

The occupation of certified drone pilot is becoming lucrative. The Association of Unmanned Vehicle Systems reports that 100,000 licensed drone pilot jobs will be available by 2025, with strong income potential depending on the project.

Participants of a drone operations course at Northeast Community College watch Penny Korth (second from left) use a remote control to fly a drone over the institution’s Norfolk campus recently. The course, taught by Brian Anderson, Northeast mass media – broadcasting instructor and certified drone pilot (third from right), provided a deeper understanding of applicable regulations, flight maneuvers, missions planning and safe operation of drones in controlled airspace. In addition, the class prepared students to get licensed by the Federal Aviation Administration, which is the only agency that can certify and license drone pilots.