Northeast in South Sioux City helps those in need 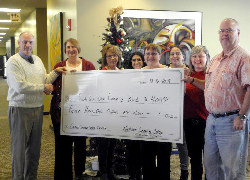 SOUTH SIOUX CITY, NE – Faculty and staff at the Northeast Community College extended campus in South Sioux City have celebrated the holiday season by helping those in need.

Dr. Cyndi Hanson, executive director of Northeast in South Sioux City, said faculty and staff each contributed $1 to wear jeans on designated Friday throughout the year in order to assist the project.

"We have many students who are working a couple part-time jobs to help support their families while they attend college. We know the gift of food from Cardinal Christmas Baskets makes an impact on their ability to balance all the demands of life," she said.

Bill Garvey, co-coordinator of Cardinal Christmas Baskets, said, "People often wonder how much difference a donation makes. In general, every $75 donated makes it possible to deliver to one family - the value of the goods is greater due to some in-kind donations, but cash of $75 feeds a family at Christmas. We are so pleased to have the regular support of Northeast Community College employees with a cash donation and the support of students who ring bells for donations too."

The Cardinal Christmas Baskets program is a Dakota County tradition that dates back to 2008. This year, volunteers delivered approximately 365 of the baskets to families in need.