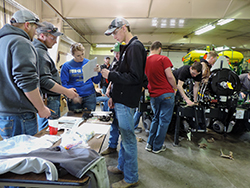 Constructing a plot planter from scratch was the brainchild of the Osmond native, who is in his first year as a precision agriculture instructor at Northeast.

The College’s Precision Agriculture Program was launched in fall 2016, and is finishing its second year. This weekend, an expected 14 students will graduate from Northeast with an associate of applied science degree in precision agriculture.

Over two years, students in this program develop technical skills and learn to interpret, analyze, and utilize data gathered from precision agriculture technologies to maximize crop yield potential through resource-efficient practices. These skills will be beneficial to the future technicians and producers in the rapidly changing agricultural industry.

The planter construction phase included ordering parts and checking in parts that were delivered in a mixture of dozens of cardboard boxes and wood pallets.

He said that “after understanding how the machine works, and how parts relate to one another, we will be doing some troubleshooting and diagnosing of problems associated with mechanical issues and electrical issues,” Lambrecht said. That knowledge can help relieve downtime in the field, he said.

One by one, the parts were added to a four-row tool bar during twice-weekly lab periods that were preceded by in-classroom instruction.

During a recent lab period, some students read directions on how to install the single- row modules that process information and take readings during the planting process. Some students, armed with combination wrenches, tackled the installation of hydraulic hoses.

After pointing out that one of the hoses was twisted during installation, Lambrecht shared what he called a “take-home message.” Twisting shortens the life of a hose, he said.

Justin Evert of Howells, who received his associate’s degree in agronomy last May, is among the 19 students in the Precision Agriculture Hardware class. “Our planter at home is pretty basic compared to what’s all on here,” he said, pointing to the class project.

Evert said he returned to Northeast for another year to take the precision agriculture classes. “What I’ve learned the past year gets me caught up with leading-edge technology for the future,” he said. That knowledge, he said, will serve him well as an area agribusiness employee and on the family farm.

Lambrecht said the planter will soon be used to plant corn in a test plot on the Northeast Community College Farm, with students involved, weather permitting. The research will include a focus on downforce, which is what pushes the planter’s row units into the soil.

“Too much downforce will cause soil compaction around the seed trench, making it hard for the seeds’ roots to grow and properly develop, resulting in less nutrient and water uptake and, ultimately, less yield,” Lambrecht said.

“Too little downforce, and we will run the risk of planting the seed too shallow, resulting in uneven plant emergence, which is critical for optimum yield,” he said. “Our goal is to make every seed sprout out of the ground at the same time.”

Next spring, Lambrecht said he is hopeful a multi-hybrid test plot can be planted on the farm. The focus will be on how corn hybrid response can vary by environment.

Lambrecht, who graduated from Northeast Community College with an associate’s degree in agronomy, went on to earn a bachelor of technology in agriculture degree from Northwest Missouri State University. Then, while working at a seed dealership, Lambrecht said he learned precision agriculture concepts from the ground up through hands-on real-life experiences and training.

Five Northeast Community College students (left) study directions on how to mount a single-row modular unit, while other students (right) construct a four-row planter during the lab portion of their Precision Agriculture Hardware class. Modules, a component of precision agriculture, process information and take readings during planting.