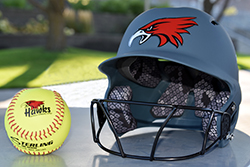 NORFOLK, NE – Northeast Community College has signed eight student-athletes to play softball for the Hawks in 2018-19.

Berryman attends Norfolk Catholic and is a two-year letter winner for Norfolk High School. She has a batting average of .386 and a .527 on-base percentage.

“Maggie is a high character student-athlete coming from a high character family, “Woodhead said. “I’m thrilled she will be joining our program. She brings some power to the table for us and I can’t wait to see it.”

“Alexa (Brenn) is coming in with a head full of steam and I am thrilled. She’s coming off a great senior year pitching at Arlington High School in which she helped get her team to the state tournament. She is a determined athlete and a great overall person. I can’t wait for her to join our program next year.”

For her career, Brenn has recorded 64 wins, 545 strikeouts along with 24 shutouts. She has earned numerous honors, including first team all-conference, Omaha World-Herald and Lincoln Journal Star All-State first teams, and All Area Omaha Team during her senior season.

Woodhead said, “I like Jacq! The girl just knows how to work hard…in school, in life and on the softball field. She has some grit to her. She also does it all with a smile on her face; I don’t know many people that can do that. It’s infectious! So I look forward to having her come out her next year and adding her many qualities to our program.”

Johansen has a .450 batting average and an on-base percentage of .598. She has hit 27 homeruns, 23 RBIs and recorded 27 runs. She has been named to all area and honorable mention teams by the Omaha World-Herald, Lincoln Journal Star, Grand Island Independent and York News-Times.

“Ginni is an awesome girl,” Woodhead said. “She has some heart and outstanding character! I look forward to her joining our program next year. She’s an aggressive player who will undoubtedly push us all to be better.”

“She has some great raw power at the plate and a good softball IQ. Chantel prefers the outfield, but I’ve watched her at short and second a few times and she does a nice job there, just another attribute to a good softball IQ. She will bring some personality to the team and I look forward to it!”

Woodhead said McKewon will be a two-sport student-athlete, playing both softball and soccer for the Hawks next season.

“Mickey is a very diligent athlete. I look forward to seeing her speed put to good use on both the soccer and softball fields!”

McKewon was named to the Nebraska Capitol Conference Honorable Mention teams in 2015 and 2017, set school records for earned run average, most stolen bases and assists.

Thompson is a three-year letter winner at Norfolk High School and was also named to the Greater Nebraska Athletic Conference All-Academic Teams in 2016 and 2017. She has a .266 batting average, .329 on-base percentage and a .953 field percentage.

“I like Jaida’s spirit,” Woodhead said. “She’s a chatter box on the field and is constantly looking to increase the moral of her teammates. I think that’s a great quality in a teammate. I’ve also watched her make some great plays at second base. I’m excited to have her join our program next year and have her help keep our energy up on the field.”

Woodhead was impressed when she was saw Urdiales playing for Horizon High School in Thornton.

“I remember talking to Karissa’s travel ball coach and she told me I needed to watch her at shortstop…even though she was small, I needed to watch her play. I can’t make this up, the next ball was hit up the middle and Karissa dives and stops the ball, and throws the runner out at first! Karissa has that competitive drive that coaches want each of their players to have. She’s a great defensive player that swings well and can run well. She will be a valuable asset to our team next year.”

Urdiales, a pitcher of the year, assisted her team to a second place finish in the Louisiana United States Specialty Sports Association (USSSA) Fast Pitch championship. Her team also placed first in the Colorado Stampede fall tournament and second in the spring tournament.