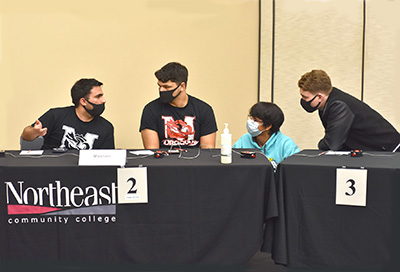 Due to the pandemic, this year’s Scholastic Contest was held virtually, with students competing from each of their schools rather than traveling to Norfolk. A quiz bowl competition was held in person on Northeast’s Norfolk campus with social distancing protocols in place. The quiz bowl was won by Madison High School, with Howells-Dodge High School taking runner-up honors. Approximately 1,130 students from 46 Class C and Class D schools participated in the scholastic contest and quiz bowl competition.

Each first-place championship school from Class C and D was awarded a $1,000 scholarship from the Northeast Community College Foundation. The scholarship will be awarded to the school whose team placed first in each class of the competition. Recipients must be students who graduate this spring and then register as a full-time student at Northeast for the 2021-22 academic year. In addition, Northeast will award tuition waivers of $1,000 each to seniors who earned first place on their exams. Waivers will be awarded to 12 seniors in both Class C and Class D with the highest percentage grade on the test that earned the student first place.

Dr. Michele Gill, vice president of educational services, congratulated the students for participating in this year’s contests and quiz bowl.

“Although the pandemic still causes disruptions in our lives, I am pleased Northeast Community College was able to provide area high school students an opportunity to participate in these challenging academic activities. Although the scholastic contests were held remotely, the quiz bowl portion of the competition allowed students a chance to compete against each other in-person in a safe environment.”

Gill said the event requires extensive coordination by all divisions of the College in order for it to run smoothly.

“I want to extend my sincere appreciation to all Northeast employees who had a part in making this such a great event for future Northeast students. I especially want to thank our faculty for updating exams and exam proctors in individual high schools. And special appreciation goes out to the staff who performed behind the scenes work to make this event a huge success.”

The first Northeast Community College High School Scholastic Contest was held in 1984 with 13 Class C and D schools participating. There were also a few Class B schools in the original contest.