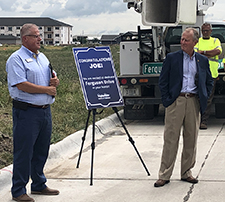 NORFOLK, Neb. – Joe Ferguson has devoted a large part of his life to putting area residents on a path to homeownership. Now, one of those paths leads to a new street named after the former director of the Business, Industry and Economic Development Division at Northeast Community College.

He was surrounded by family and friends when Ferguson Drive in the Nor-Park Subdivision was dedicated in his honor earlier this week. The subdivision is located just north of the Nebraska Public Power District campus and the Nucor Detailing Center on Chestnut Street in southeast Norfolk.

The recognition honors Ferguson’s dedication to many economic development projects across the region, including his work to develop the Nor-Park project.

“Someday we’ll look through the history books about Norfolk and Joe Ferguson’s name will loom large,” said Mayor Josh Moenning, of Ferguson’s dedication to the community and region.

Single-family lots have been developed for homeownership, while the townhomes are designed for either homeownership or rental. The tri-plex units and apartments serve as rental properties.

Ferguson previously served on the NeighborWorks Northeast Nebraska board and has worked on a number of projects to develop additional housing in Norfolk. He served 26-years at Northeast Community College.

Joe Ferguson (center) listens as Roger Nadrchal, CEO of NeighborWorks Northeast Nebraska (left), speaks during the dedication of Ferguson Drive in southeast Norfolk earlier this week. The street is named after Ferguson for his work in housing development in the community.