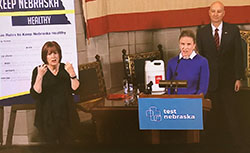 “Our nurses have been on the front line to keep Nebraskans healthy and safe through this public health emergency and dealing with our folks who have been testing positive for coronavirus. … so we appreciate all of their great hard work,” Ricketts said. “… If you know a nurse, please thank (them) because that person is working very hard right now to be able to keep Nebraskans safe.”

Dr. Kari Wade, president-elect of the Nebraska Nurses Association and a graduate of Northeast Community College, also spoke at the news conference to describe the vital work being done by nurses throughout the state during the ongoing pandemic.

She said the World Health Organization declared 2020 as the Year of the Nurse in celebration of the 200th anniversary of the birth of the founder of the nursing profession, Florence Nightingale.

“While 2020 was proclaimed as the year of the nurse, we recognize that healthcare is complex and requires all members of the healthcare team from our EMS/first responders, our partners in public health, physicians, physician’s assistants, respiratory therapists, nursing assistants, pharmacists, and so many more to collaborate and work together to promote the best health outcomes for Nebraskans,” Wade said.

She described nursing as a “noble” profession.

“There’s a reason why Gallup polls have recognized nursing as the most honest and ethical profession for the last 18 consecutive years. Never has caring required more courage, selflessness, and strength than it has over the past few months.”

Wade received an Associate Degree in Nursing from Northeast Community College in 2000 and continued her educational journey over the next several years earning a Bachelor degree in nursing from Creighton University and a Master of Science degree in nursing with a concentration in nursing education from Nebraska Wesleyan University. She completed 29 hours toward a Doctor of Philosophy from Michigan State University and received her Doctor of Education from the College of St. Mary.

Wade was inducted into Northeast’s Alumni Hall of Success in 2015.

At this week’s news conference, she expressed her appreciation to her fellow nurses and all of those who work alongside them.

“Thanks to our nurses for being strong and courageous during this time.”

Dr. Kari Wade, (center) president-elect of the Nebraska Nurses Association, speaks during a news conference earlier this week at the State Capitol in Lincoln on a proclamation declaring May 6-12 as National Nurses Week and the month of May as National Nurses Month in Nebraska. Gov. Pete Ricketts is standing behind her. Wade is a 2000 nursing graduate of Northeast Community College. (Courtesy NET)