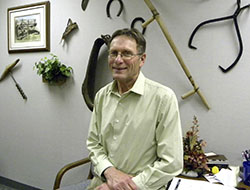 NORFOLK, Neb. - Linda Pohlman is using retirement funds to make a donation to construct new agriculture facilities at Northeast Community College in memory of her late husband, Chuck Pohlman, who served as the institution’s first dean of agriculture.

Chuck Pohlman began working at Northeast in 1972, and created the first agriculture program at any community college in Nebraska. He retired 40 years later, and the ag complex on the Norfolk campus he helped design and for which he raised funds bears his name. Pohlman died in May 2018.

Linda Pohlman said she knew she wanted to make a significant donation to the Nexus project in her husband’s memory, and talked with her tax accountant about using retirement funds for that purpose.

“He said instead of the money going into my account and having me declare it as income that year, the money can go directly to the college with no tax disadvantage to myself,” she said.

Pohlman, of Hadar, said her husband would have approved of this use of their retirement funds.

“This is something so close to his heart,” she said of the plan to build a new veterinary technology clinic and classroom and move the college farm to a new site. “He really wanted to see this accomplished. The college has affected so many lives in northeast Nebraska. We’ve had students from South Dakota, Iowa, Kansas and other states, too, so it’s really affected a large part of the United States in agriculture.”

“With Chuck full time at the college, he made a lot of the management decisions for the family farm, but with the help of college students I carried out his decisions. We would have two students who worked on our farm Monday, Wednesday, and up to noon on Friday, and then somebody else on Tuesdays and Thursdays.”

“And when they worked, they would sit around the kitchen table as part of our family,” she continued. “That was a fringe benefit. I always made supper for them. It was fun getting to know about their families and their hopes and dreams. They were a wonderful influence on our children.”

Linda Pohlman said the student workers included several sons who followed in their fathers’ footsteps, like Garret and Tom Ruskamp, Cody and Perry Schultz, and Jared and Dave Tomjack. She said the Pohlman farm near Hadar was the scene of several graduation parties during the early years of the Northeast agriculture program, and she remembers several student softball games in their pasture.

“We share Linda’s desire to honor Chuck with these new facilities,” said Tracy Kruse, associate vice president of development and external affairs and executive director of the Northeast Foundation. “He pioneered agriculture at the community college level in Nebraska and grew our program from the original three students to an enrollment of about 350 today. It was Chuck’s work and vision that set the stage for all of the innovation in agriculture that takes place every day on the Northeast campus.”

Kruse continued, “We invite all of those touched by Chuck Pohlman to join his family and make a donation to the Nexus project in his memory. What better way to remember and honor Chuck than to help complete his dream of state-of-the art agricultural facilities for Northeast students?”

The initial phase of construction of the project includes a new veterinary technology clinic and classrooms, a new farm site with a large animal handling facility and other farm structures for livestock operations, a farm office and storage. The new facilities will be located near the Chuck M. Pohlman Agriculture Complex on E. Benjamin Ave. in Norfolk. Site work is expected to begin in April and should be completed by the Fall of 2021.

The funding for the agriculture facilities will come from the College’s commitment of $10 million, as well as external fundraising to fill the gap. With a total project cost is $22.3 million, the College has raised enough funds to begin construction; however, fundraising for the Nexus campaign will continue, as more is needed for equipment, technology and furnishings.

In August 2019, the Acklie Charitable Foundation (ACF) announced a $5 million lead gift to the Nexus project. ACF was founded by the late Duane Acklie and Phyllis Acklie, both Madison County natives and graduates of Norfolk Junior College, a predecessor institution of Northeast Community College.

The late Chuck Pohlman, the first dean of agriculture at Northeast Community College, stands in his office prior to his retirement in 2012 after serving 40-years in the position. Linda Pohlman is using retirement funds to make a donation in her husband’s memory to construct new agriculture facilities at the College. (Courtesy Norfolk Daily News)