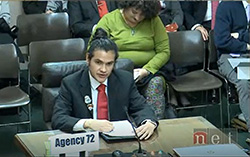 LINCOLN, Neb. – Joshua Santiago’s trip to visit the state capitol building in Lincoln recently was not for a sightseeing tour. He was there on business.

The accounting major at Northeast Community College was among those who testified before the Legislature’s Appropriations Committee in support of LB 1008, which would expand access to Nebraska college students pursuing degrees in high-wage, high-skilled and high-demand areas such as engineering, math and information technology, among others.

“It is up to you to fulfill our upcoming youth’s dreams to become Nebraska’s next linemen, veterinary technicians, welders, scientists, and all other contributors to the Nebraska economy,” Santiago told committee members. “With this scholarship bill being passed, it is another affirmation of being ‘Nebraska Strong.’”

The Nebraska Career Scholarships program, proposed by Gov. Pete Ricketts and introduced by Speaker of the Legislature Jim Scheer, of Norfolk, would invest a total of $16 million over the next four years. Half of that would be split among students who attend community and state colleges, with the remaining $8 million going to the University of Nebraska system.

Santiago, of Norfolk, shared that after graduating from Norfolk Senior High School he applied and was accepted into a four-year university in Colorado for a degree in biochemistry. Confident after scoring a 35 on the science section of the ACT, he went with no scholarship, but applied for all federal loans that were possible. However, he quickly realized he needed to make some changes, including switching majors.

“My major change saved my college career,” he told senators. “Surrounded by debt, I knew that I had to find another track of study that suited my life mission of helping lives. Northeast Community College saved my life by providing an affordable education, yet I had no idea what was to transpire.”

Santiago has excelled at Northeast. After earning two scholarships - The Marianne Thoendel Memorial Scholarship and the McMill CPAs & Advisors Scholarship - he credits his business and economic instructors’ preparation in propelling him to the top of his classes in quick fashion. His work outside of class as secretary of the Student Leadership Association (SLA) and president of the Phi Beta Lambda (business) chapter has allowed him to develop power skills, such as communication and teamwork.

Santiago said LB 1008 would save others students from the hard, painful financial journey he and his family experienced prior to attending Northeast.

“If I would have been able to secure a scholarship to Northeast from the get-go and not listen to the common rabble of moving away, maybe I would have been on track to graduate in four years with no debt. I am not ashamed to tell my story and make people aware of the student debt bubble I am unfortunately apart of. It is my experience (this legislation) will save future students from enduring the same hardship.”

A few days later, Santiago was back in Lincoln with three of his peers in SLA meeting with other lawmakers to discuss the scholarship bill and other matters as part of the Nebraska Community College Association’s Legislative Day. He was joined by Andrew Smith, North Platte; SLA president, Carlos Villareal II, Houston, Tex.; SLA vice president, Tyler Brandt, Norfolk; SLA member; Leah Barrett, Northeast president; and Tracy Kruse, the college’s associate vice president of development and external affairs.

“I was proud as I listened to each of them talk to several of our area state senators in the college’s 20-county service area, as well as some legislators outside of our service area about their experiences at Northeast,” Barrett said. “They softly advocated in an appropriate manner for the scholarship legislation and for community colleges.”

Kruse said it also spoke to the work Northeast Community College is doing in workforce development.

“All of these students went to another college first and then came to us when they realized what they left the area for wasn’t there and that they can get a great education at Northeast. Now they all have jobs offers locally once they graduate. These students are truly the image of great community college students.”

Following his graduation from Northeast in May, Santiago will transfer to York College and eventually wants to become a CPA. When reflecting on speaking before state senators, he is pleased to have had the opportunity to testify on such a significant piece of legislation.

“It was really just a great honor to represent Northeast Community College and talk about the need for these scholarships,” he said. “I think some people don’t understand what a community college offers. We have been recognized nationally, have great academic and athletic programs and great instructors. It’s an outstanding place to get an education.”

Joshua Santiago, Norfolk, a student at Northeast Community College, testifies in support of LB 1008 before the Nebraska Legislature’s Appropriations Committee in Lincoln recently. The legislation would expand access to Nebraska college students pursuing degrees in high-wage, high-skilled and high-demand areas such as engineering, math and information technology, among others. (Courtesy NET)