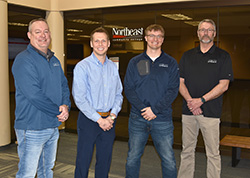 NORFOLK, Neb. - Another area bank is throwing its financial support behind Northeast Community College’s plans to enlarge and enhance agriculture facilities on its Norfolk campus.

Rick Chochon, president of Great Plains State Bank, has announced that the bank would invest $25,000 in Northeast’s Nexus project.

“Agriculture will always be important in the state of Nebraska,” Chochon said, “and that’s never going to change. I think the innovation that Northeast Community College is coming up with is definitely going to help the ag sector moving forward. What they’re working toward with the Nexus project is well worth our investment.”

Great Plains State Bank was formed when an investment group headed by Chochon purchased the former Petersburg State Bank in 2016. Great Plains State now has facilities in Petersburg, O’Neill, Columbus and Omaha, with a new headquarters building under construction near 33rd Avenue and Lost Creek Parkway in Columbus.

“When building the Columbus facility, we have tried to use all local contractors who are customers. That’s why we’re here – to support local business,” Chochon said.

Agriculture loans are a major part of the portfolio of Great Plains State Bank, Chochon explained.

“We pride ourselves on the personal service other banks can only talk about.”

“We are pleased to welcome Great Plains State Bank as a partner in the Nexus project,” said Tracy Kruse, associate vice president of development and external affairs and executive director of the Northeast foundation. “Financial institutions in northeast Nebraska and elsewhere in the state recognize the importance of agriculture to the state’s economy and are investing in the future of agriculture through their contributions to the Nexus project.”

Funding for the $23 million Agriculture & Water Center for Excellence project is currently being solicited to enhance and expand the agriculture facilities at Northeast Community College. In addition to the College’s commitment of $10 million, Northeast is seeking at least $13 million in private funds to begin the initial phase of construction, which includes a new veterinary technology clinic and classrooms, a new farm site with a large animal handling facility and other farm structures for livestock operations, a farm office and storage. The new facilities will be located near the Chuck M. Pohlman Agriculture Complex on E. Benjamin Ave. in Norfolk.

In August, the Acklie Charitable Foundation (ACF) announced a $5 million lead gift to the Nexus project. ACF was founded by the late Duane Acklie and Phyllis Acklie, both Madison County natives and graduates of Norfolk Junior College, a predecessor institution of Northeast Community College.