Anderson to continue to serve as Northeast board chair 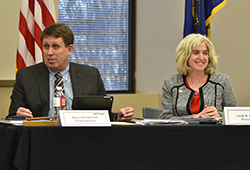 NORFOLK, NE – Steve Anderson will serve a second year as the chairperson of the Northeast Community College Board of Governors. The term runs through December.

Anderson, of Concord, is a District III member, which includes Dixon and Dakota counties in their entirety and a portion of Cedar County.

Other officer positions for 2020 include District III member Arlan Kuehn, of South Sioux City, who will continue as vice chair, and District V member Julie Robinson, of Norfolk, secretary.

In 2017, Anderson was presented with the Nebraska Community College Association’ Governor’s Award. The award is presented annually to one board member from five of the state’s community college areas.

The following year, Anderson was recognized by the Association of Community College Trustees (ACCT) with its 2018 Western Region Trustee Leadership Award. ACCT’s Western Region covers 10 states and five Canadian provinces and territories. Geographically, it is the largest of the association’s five regions across North America.

Diane Reikofski was reappointed board recording secretary and the vice president of administrative services at Northeast was reappointed as board treasurer at the board’s monthly meeting in Norfolk recently.

Steve Anderson, of Concord, chairperson of the Northeast Community College Board of Governors oversees a board meeting in Norfolk recently. He is pictured with Dr. Leah Barrett, college president.