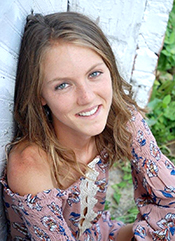 OMAHA, NE - A Northeast Community College Media Arts - Broadcasting student is one of six college students in Nebraska to receive a scholarship from the Nebraska Broadcasters Association Foundation (NBAF).

Kelsey Bigelow, of Milligan, has been selected for the Dick Palmquist scholarship, and has been awarded $3,500 for demonstrating her significant interest in becoming a future broadcaster. She was the only two-year student among the awardees.

The NBA Foundation makes available up to $25,000 per academic calendar year for qualifying state college and university students in the NBAF’s College Scholarship Program. This year’s applications were carefully reviewed and judged by the NBA board’s Education Committee. The NBA Executive Committee then gave unanimous approval to their recommendations in December.

Bigelow will graduate from Northeast this May with an Associate of Applied Science Degree in Media Arts – Broadcasting, as well as an Associate of Arts Degree (Academic Transfer). She is planning to attend a four-year institution following her time at Northeast to further build her skill, with aspirations of becoming a television sports announcer and analyst.

In his letter of recommendation for Bigelow, Broadcasting Instructor Brian Anderson wrote: “Kelsey has been a go-getter from the moment she arrived here at Northeast. Her dream is to call games for network television. Kelsey has taken the initiative to set up job shadows with companies such as ESPN and Fox Sports to get a better understanding of the industry and their expectations of their employees. In my opinion, Kelsey has a promising future in the broadcast industry and exemplifies the characteristics of a broadcast professional.”

The Northeast Community College broadcasting program has been a member of the Nebraska Broadcasters Association since 2013. Along with scholarship opportunities, the association also provides college students with opportunities to submit entries for awards, network with members of the industry and participate in NBA-funded training. During fall 2019, Northeast broadcasting students participated in the P-1 Learning Broadcast Sales course. The NBA paid for the students to take the two-week online course, which gives them a deeper look into the world of broadcasting sales.

The Northeast broadcasting-radio TV concentration is designed to prepare students for entry-level positions in broadcasting, television and related industries.