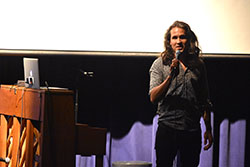 NORFOLK, NE – By night, David Zach lives the life of a musician as guitarist and lead vocalist for the rock band Remedy Drive. By day, and just about the rest of his waking hours, he works as an undercover operative with an organization fighting and combating the scourge of human trafficking.

According to the band’s website, it has partnered with an abolitionist group called The Exodus Road which has seen Zach participate in nine deployments in Latin America and Southeast Asia. This has included casework inside of brothels and red-light districts to find evidence of sex trafficking.

During a presentation at Northeast Community College, Zach shared his work with The Exodus Road, which, he said, uses “actionable evidence” to rescue girls and boys who are trapped in the sex trade and to work with local authorities to make raids on establishments that result in the arrests of traffickers.

“So far, the Exodus Road has rescued 1,250 people from slavery which is exciting - something we celebrate. We have also busted over 500 traffickers. That sends a message to these punks that someone is paying attention.”

The band has also assisted victims after their rescue. T-shirts sold at Remedy Drive concerts are made by survivors of trafficking, which involves five organizations that help rehabilitate survivors, repatriate them and give them temporary or transitional employment.

Zach said the work through The Exodus Road was summed up for him about two-years ago while he and his brother, Phillip, recorded an album in the same Southeast Asian neighborhoods where they conducted their undercover work at night.

“My goal is that the heaviness of this issue find its ways through the melodies, but also through hope in a modern day underground railroad with ordinary people that are living their lives selflessly in this fight.”

He told the Northeast audience he knows with 40 million people across the globe held against their will, slavery won’t end in his lifetime, but “we can tear a corner off the darkness.”

David Zach, guitarist and lead vocalist for the rock band Remedy Drive, speaks during a presentation at Northeast Community College in Norfolk on his undercover work with an organization fighting and combating human trafficking in Latin America and Southeast Asia.