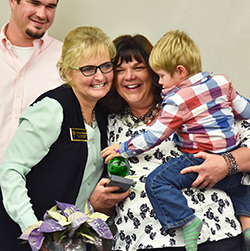 NORFOLK, NE – Michelle Soll is described as dedicated, compassionate, passionate, strategic, hard-working, and optimistic. They are traits that serve the Bancroft woman well in her work in assisting people in rural America who, for many, are at their breaking point.

Soll, farm project manager for Legal Aid of Nebraska, coordinates the agency’s Nebraska Rural Response Hotline, where she has answered thousands of calls from people regarding a number of concerns ranging from legal matters to seeking advice on financial and family issues.

Soll, who spoke during the 11th Annual AG-ceptional Women’s Conference at Northeast Community College recently, said the hotline was established during the farm crisis in the 1980s. She has operated the service since 1989.

Soll and her husband, Mick, also run a diversified farming operation near Bancroft, where they raise row crops, some under organic certification, as well as cattle.

“She is active to the point of driving equipment and being a right-hand (wo)man in the field and pasture, but she also knows all the ins and outs of the farm’s financial picture,” said Bobbie Kriz-Wickham, public affairs/outreach coordinator for the Nebraska Farm Service Agency. “This level of knowledge and dedication to the family operation became all the more important a few years ago when her family endured her husband’s cancer diagnosis and successful treatment.”

Kriz-Wickham said this first-person background allows Soll to empathize with callers to the Rural Response Hotline in that “she has walked in their shoes,” and has experienced similar stressful situations. For 30 years, Soll and her fellow hotline workers have fielded approximately 300 calls per month from farmers, ranchers and rural residents in need of assistance.

Karla Bahm, manager of the Nebraska Department of Agriculture’s Next Gen program, said many of the callers are emotional, while some are suicidal.

Bahm said, “Michelle is the calm voice of reason under stressful circumstances. Her compassion and steadfastness was ever more evident recently when Nebraska was hit simultaneously with a blizzard and the worst flooding natural disaster in (the state’s) history affecting 81 of 93 counties.” … “From food pantries, to the Nebraska Department of Health and Human Services, to mental health counseling, you name it and she knows about it.”

Legal Aid of Nebraska offers free legal assistance to low income individuals and senior citizens across the state through a full range of civil matters. Soll’s other responsibility through her work as the agency’s farm project manager is to help increase the number of beginning farmers in Nebraska through education on legal and financial matters.

Following her address to attendees of the AG-ceptional Women’s Conference, Soll was surprised to be presented with the event’s Award of Merit by Corinne Morris, dean of agriculture, math and science at Northeast and conference director. Her family joined her in surprising her with the recognition.

Kriz-Wickham and Bahm said that Soll’s award is well deserved.

“We would argue that Michelle’s work has been critical to helping countless Nebraska farmers and ranchers over the past 30 years successfully remain on, start or grow their agricultural operations,” they said.

Corinne Morris, dean of agriculture, math and science at Northeast Community College (left), presents Michelle Soll, farm project manager for Legal Aid of Nebraska, with the College’s AG-ceptional Women’s Conference Award of Merit while holding her grandson, Waylon Rabe, of Pender. Soll coordinates the agency’s Nebraska Rural Response Hotline, where she has answered thousands of calls from people regarding a number of concerns ranging from legal questions to seeking advice on financial and family issues.