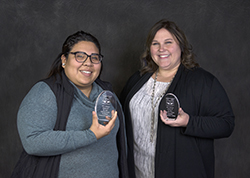 NORFOLK, NE – The Student Activities Council (SAC) at Northeast Community College knows how to throw a party and keep students entertained. The job of the members and their advisors is to ensure that students are kept busy outside the classroom while on campus through a host of events - whether it is at an athletic contest, bringing in a musician or comedian, through public service projects or spending the night watching a movie. ow, two members of the team have earned individual honors for their work while several SAC-sponsored projects and items from the past academic year have received recognition.

The Association for the Promotion of Campus Activities (APCA) named Carissa Kollath, director of student activities, as Midwest Region Advisor of the Year, and Victoria Gaona, Gibbon, SAC secretary, as Midwest Region Student Programmer of the Year at the association’s regional conference in Chicago recently. Both women now qualify for the same awards at the national level at APCA’s annual conference in Orlando.

The mission of the APCA is to promote campus engagement through quality educational experiences, affordable entertainment and community service initiatives through all levels of colleges and universities across the country. The association is divided into five regions across the country and includes both two-year and four-year colleges and universities.

Also at the Chicago conference, Escamilla, Northeast SAC president, competed on-site in an
E-sports tournament throughout the conference and won 2nd place in the Super Smash Bros. bracket.