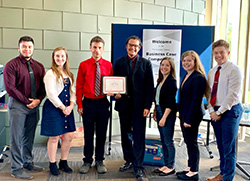 They were among seventy students from six colleges and universities to participate in Morningside College’s inaugural Business Networking and Case Competition, presented by Sterling Computers, on the Morningside campus in Sioux City. Northeast finished third in the competition.

PBL places an emphasis on helping students transition to the business world. There are approximately 11,000 PBL members on college campuses across the country.

The purpose of the event was to provide a forum for regional business students to participate in a business case competition, learn from industry experts, network with other students and business professionals, and have the opportunity to attend a career fair.

The competition began with a tour of Sterling Computers in North Sioux City, SD, before students returned to the Morningside campus to prepare and present their solutions for the case competition. Following the competition, students had the opportunity to speak with organizations at a career fair and compete in the Great West Casualty Personal Branding Pitch Competition before participating in two business breakout sessions.

Cash prizes totaling $1,000 were awarded to the winners of the case competition and the personal branding pitch competition.

Joining the students at the competition was Angie Shaffer and Cara Hoehne, Northeast business instructors/PBL advisors.