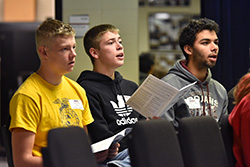 NORFOLK, NE – The Norfolk campus of Northeast Community College was filled with the sound of music earlier this week as a number of the region’s top high school musicians and vocalists had the opportunity to participate in an honors program through the institution’s music department.

The 110 students from 23 schools participated in the second annual HAWKFEST, which featured daylong rehearsals that were capped off by a public performance in the College’s Lifelong Learning Center. The
50-member honor band was under the direction of Kevin McLouth, director of instrumental studies at Northeast, while the approximately 60-member honor choir was led by Stewart Cramer, director of vocal activities.

McLouth said the students earned entrance to HAWKFEST through an audition process. He was pleased with how they performed.

“These young ladies and gentlemen have worked hard,” he told the audience. “Our goal … is to make music when we get here, not just play (or sing) notes on a page, but make music! And I think we have truly done that today and I’m really proud of them.”

McLouth gave credit to the high school music directors for preparing the students so they could be selected to participate in the honor band or choir.

“We get to pick and choose these students to work with on a day like this. But the people who do the real work are your hometown band director and your hometown choir director who stand there in front of your kids every day and teach them so they can perform in something like this. They deserve a round of applause.”

Honor Band members who performed were

Honor Choir members who performed were

Two high school seniors from each group were selected to receive a $1,000 tuition waivers should they attend Northeast next year. Those receiving the waivers were band member Zoe Hassler, of Battle Creek, and choir member Divon Tinsley, of Wakefield.

The Northeast Mass Media – Broadcasting program recorded the concert. It can be viewed and downloaded at team1sports.com/northeastcc/.

Tenors Colby Sehi, Neligh-Oakdale, Isaac Weander,Lutheran High Northeast, and Zephan Tinsley, Wakefield, rehearse with the 57 other members of a high school honor choir during Northeast Community College’s HAWKFEST this week. Following a day of rehearsals, the choir and a 50-member honor band, each held a public performance.