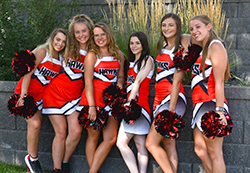 NORFOLK, NE - The dance team at Northeast Community College has kicked off its new year with six new members and one performance already under its belt.

The non-competitive squad will perform at a number of home volleyball, soccer and basketball games this year. They completed their first performance at the Northeast-Mount Marty soccer match last Tuesday, and their next performance will take place during the Northeast-Hawkeye CC volleyball game on Wednesday, October 2.

Dance team sponsor Amanda Avidano said the team has been coming together well, with the squad learning pom, jazz and hip-hop routines.

“The first performances went very well. There are a few things we need to work on, but I am pleased with their progress, leadership, and the fun they are having. We have a talented group of girls. All have been dancing in the studio since they were very little. I am looking forward to the season.”

In addition to Northeast sporting events, Avidano said the team will also participate in school activities and other special events.