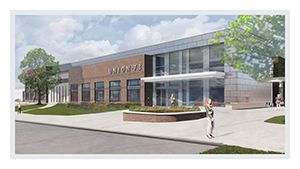 NORFOLK, NE – The new name of a building at Northeast Community College will reflect a place where students will be able to go to have many of their needs met in one location; it also harkens back to the days of the establishment of the institution 1973.

The revelation of the new moniker of the Student Center also comes at a time when the building that opened in 1984 is presently undergoing a major remodel and addition project that will double its size.

On Thursday, the College Board of Governors approved the new name of the Student Center as Union 73.

Amanda Nipp, vice president of student services, said the new name is a play on the establishment of Northeast Community College following the merger of its predecessor institutions. At Thursday’s board meeting, she said the strength of the new name focuses on the double meaning of the word union.

“It relates to both a college’s student union as a place that offers several services to students and to the 1973 merger, or union, of Northeastern Nebraska College and Northeast Nebraska Technical College. It also gives us an opportunity to showcase the College’s complete history, all the way back to 1928, within the walls of Union 73. This wordplay combined with the number 73 gives the building a smart, modern name.”

The improvements to the student center come at a good time as the 35-year-old facility, which has been properly maintained for over three decades, is in need of major repairs and renovation - notably to its exterior, electrical systems and accessibility.

The construction project is designed to create a facility to increase student success by bringing the Service (technology) Center, Library-Resource Center, Academic Support Services, and Business Services to one central location on campus. Additionally, the project will create expanded space for student health and counseling services, the Hawks Shop store operations, student activities, and a game room. An area for food service in the central portion of campus will also be incorporated, along with a dedicated college-wide secure data center.

Nipp said the project will create a central location for services for students as well as faculty and staff, while strengthen staffing efficiencies.

“Many people are excited with the name and think it’s perfect for what this building will become once work is completed in fall 2020. Union 73 is going to become the hub of the Norfolk campus – combining the academic core along with the residential and student services side of the college to really bring this all together.”

Nipp said they also plan to incorporate photos and other memorabilia of the college’s entire history into the building to showcase the new name and celebrate the legacy of Northeast and its predecessor institutions.