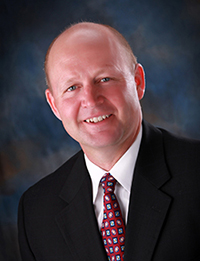 NORFOLK, NE – A bank with several locations across Nebraska has joined the list of supporters of a project to build new ag facilities at Northeast Community College. Midwest Bank President & CEO Doug Johnson has announced a pledge of $250,000 to the Nexus campaign.

“Agriculture has done a fantastic job of evolving, of adapting to change over the years,” Johnson said. “But it will be a challenge going forward. Trying to get students the tools and resources that they can use to help them in that process is important.”

Midwest Bank was founded in Pilger in 1952 by members of the Clyde and Lizzy Cooper family. Today, the Cooper family owns majority interest in banks located in Pilger, Plainview, Deshler, Pierce, Creighton, York, Norfolk, Lincoln and Wisner. In August, Midwest Bank broke ground for a new facility in Norfolk that will serve as corporate headquarters for all 10 bank locations in Nebraska, as well as two Redstone Bank locations in Colorado.

In addition to their banking interests, the Cooper family also supports health, education and recreation in the communities that Midwest Bank serves through the Jim B. & Lillian F. Cooper Foundation. Both grants and scholarships are awarded annually.

“We cannot thank Midwest Bank enough for their support,” said Dr. Tracy Kruse, associate vice president of development and external affairs and executive director of the Northeast Community College Foundation. “Their financial contribution to the Nexus campaign is an investment in the next student, the next farmer or rancher, the next agribusiness employee.”

Kruse also remarked that Johnson has supported the college by serving on the Foundation’s Board of Directors for the past eight years.

Funding for the $23 million project is currently being solicited to enhance and expand the agriculture facilities at Northeast Community College. In addition to the College’s commitment of $10 million, Northeast is seeking at least $13 million in private funds to begin the initial phase of construction, which includes a new farm site with a farm office and storage, a large animal handling facility and other farm structures for livestock operations, and a new veterinary technology clinic and classrooms. The new facilities will be located near the Chuck Pohlman Ag Complex on East Benjamin Avenue in Norfolk.

For more information on the Nexus Campaign, contact Kruse at tracyk@northeast.edu or (402) 844-7056. Online donations may be made through the website www.agwaternexus.com. Checks may be mailed to: Nexus Campaign, Northeast Community College Foundation, P.O. Box 469, Norfolk, NE 68702-0469.