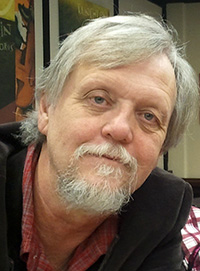 NORFOLK, NE – A poet with ties to Nebraska will be featured during the first Visiting Writers Series of the fall semester at Northeast Community College in Norfolk. Mark Sanders will read from his work on Wednesday, September 11, at 4 p.m., in the College Welcome Center, Room 1108-B.

Sanders is a poet, creative essayist, fiction writer, and literary critic, with more than 500 publications appearing in journals in the United States, Great Britain, Australia, and Canada. His work has long been devoted to Great Plains literature – most specifically, Nebraska poetry. For his work in promoting the poetry of emerging and established Nebraska writers, he won the Mildred Bennett Award from the Nebraska Center for the Book in 2007 for fostering Nebraska’s literary heritage.

Sanders won the 2019 Western Heritage Award Outstanding Book of Poetry from the National Cowboy and Western Heritage Museum for his “Landscapes with Horses.” His short story, “Why Guineas Fly,” was selected as one of 100 outstanding short stories for 2007 by Stephen King in Best American Short Stories, while his essay, “Homecoming Parade,” was designated as one of the outstanding works of the year in the 2016 edition of Best American Essays.

In addition, Sanders’ “The Weight of the Weather” earned the 2018 Nebraska Book Award in the biography category, and “A Sandhills Reader” won the 2016 Nebraska Book Award for an anthology. His newest collection of poetry is “In a Good Time,” which Wayne State College Press will publish this fall.

Sanders is the long-time editor of Sandhills Press, a small, independent press which he started in his hometown of Ord 1979. He taught English at the University of Nebraska-Lincoln, Nebraska Wesleyan University, Lewis-Clark State College in Lewiston, ID, and Stephen F. Austin State University in Texas, as well as other institutions.

The Visiting Writers Series is sponsored by the Northeast Community College English Department. All events are free and open to the public. For further information, contact Bonnie Johnson-Bartee, coordinator, at (402) 844-7673.