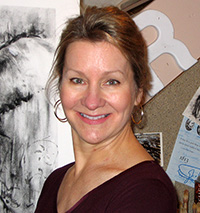 Kathleen Lohr’s pastel painting, Young Man with a Hat, was judged Best in Show at the Association of Nebraska Art Club’s (ANAC) 55th Annual Convention held this year in Albion. Entries in the show were judged by nationally known artist Joan Fullerton of Denver. ANAC is the only state organization in the country that encompasses statewide art clubs.

Lohr, Columbus, grew up in Grand Island under the shadows of the migrating Sandhill Cranes and alongside the Platte River.

“It is from these perspectives that I draw inspiration for my work in oil and pastels,” she said.

Lohr also received the Museum of Nebraska Art (MONA) Purchase Award for a second pastel painting, Mother and Child. The MONA purchases one work each year from the annual exhibition for its permanent art collection in Kearney.

Lohr’s work can be found in collections throughout the Midwest, as well as New York City. She is an associate member of the Studio K Art Gallery in Grand Island and has exhibited with the Noyes Art Gallery in Lincoln.

While she is devoted to her work as a studio artist, she also conducts workshops, judges art exhibits, and teaches art history part-time at Northeast Community College.