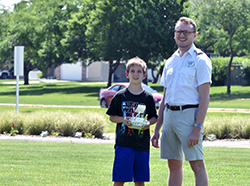 The College’s Business and Technology Division hosted its annual Drone Camp for students on Northeast’s main campus in Norfolk and at its extended campus in South Sioux City.

A drone is an unmanned aviation system (UAS) and can range in size from less than a half-pound object that can sit in the palm of one’s hand to super-sized drones that may be fixed-wing and as large as a bus.

Matt King, certified drone pilot and his team of instructors in his company, “Drone Camp,” travel the country hosting hands-on learning sessions for students generally between the ages of seven and 15. He led the two Northeast camps.

“Students spend three comprehensive days learning about drones and industry. We’re also the only drone education company in the country that teaches an ethics portion in addition to the rules, so we tell them that what’s legal is not always the right thing to do.”

Activities in the camp include a basic overview of Federal Aviation Administration (FAA) rules and regulations; drone simulators, including a drone racing simulator participants can download to their own computers; and a fast-paced search and rescue mission where participants must use maps, drones and teamwork to deliver items. Participants also learned about the components of a drone and compete in a race to assemble one of the top-selling drones in the world.

King said most students are surprised to learn of the rules and regulations that come with operating drones.

In this hands-on learning experience, participants also put together their own drones to keep, learned how to fly them and earned their Junior Pilot Wings.

“In order to get their wings, they have to pass their flight test and complete building their drone, which just about everyone does,” King said.

Drones are becoming extremely popular with approximately two million of the non-commercial devices sold this past Christmas season alone.

King said the industry itself is changing as the current administration has reduced some of the regulations that allow for more innovation.

“That’s why you are hearing more about the possibility of things like Amazon offering drone delivery of its packages, potentially, in the near future,” he said. “It is happening now, but when you hear about drone deliveries, it’s in places like Europe or overseas somewhere, but testing is taking place in this country.”

The Association of Unmanned Vehicle Systems reports that 100,000 licensed drone pilot jobs will be available by 2025, with strong income potential depending on the project.

King predicts that many of the students who attend his camps have potential careers piloting drones when they reach a working age as the industry continues to evolve.

“When I started in this business five-years ago, you had to be a licensed pilot – meaning airplanes – in order to do this professionally. So, I went to flight school to fly planes in order to fly drones. Now, you have to be at least 16-years old, you have to take a written test that costs $110 and no previous flying experience is required. And if you pass, you’re a licensed drone pilot.”

Despite all of the regulations, King said flying drones is a “blast.”

“It’s really neat seeing the students walk in the first day and maybe be a little scared and not know anything. And it’s great to see by the time they leave all of this knowledge they now have. We teach this in a fun way where they are learning without them really knowing that they are learning at the time.”

Drones have a number of uses including inspections of buildings, communication and utility towers, inspect for damage to areas and structures in hard to reach places, fly over disaster location sites and mapping, among others.

Power and wind energy are among industries that have incorporated drones into their operations, designed to be used for inspections at critical heights. Northeast’s wind energy program has also been using a drone with students in its program to inspect its wind turbine on the Norfolk campus.

In addition, Northeast has been in contact with one company that is interested in having the college assist in training its employees with the basics of flying drones in its operations.

For more information on the new drone operations class, contact the Northeast Community College Business and Technology Division at (402) 844-7290