Interim leadership named at Northeast as board seeks new president 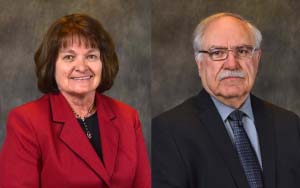 NORFOLK, NE – The Northeast Community College Board of Governors has named interim leadership as the Norfolk-based institution begins the process to hire its new president following the retirement of Dr. Michael Chipps on May 31.

Mary Honke and Steve Schram, who have a number of years of experience at Northeast, will serve as co-interim president beginning June 1. The appointments were made following a unanimous vote of the board at its monthly meeting on Thursday.

Schram, a former vice president of administrative services, retired from his position in 2008, but has continued to serve the college as a special projects consultant, which, most recently, has included administering construction projects.

Schram and Honke have been serving as co-interim vice president of finance and facilities since January 2019.

“I look forward to working closely with the board, administration, faculty and staff in this role.” Honke said. “Northeast Community College is a special place to me and I am happy to assist in continuing to advance the mission of serving our students and the public during the transition.”

Schram said, “Northeast has an exceptional team in place as well as strong academic programs and great facilities. Having previous experience with the institution will allow Mary and I to hit the ground running during the interim.”

This is not the first time Honke and Schram have served as co-interim president. They held the position from November 2011-February 2012 after Dr. Bill Path’s departure to assume the presidency of Oklahoma State University Institute of Technology and upon Chipps' arrival at Northeast.

Steve Anderson, of Concord, board chairperson, said Honke and Schram’s wealth of knowledge of Northeast will serve the college well until a new president is hired.

“We are so fortunate to have Mary and Steve assume this role during the transition in administrative leadership. The board is grateful for their willingness to serve. In addition, our students and constituents in our 20-county service area can be assured that the college will continue to operate seamlessly during the transition process.”

Chipps’ last day serving as president is May 31, 2019. Honke and Schram will begin their interim duties June 1.