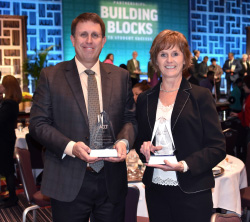 NEW YORK, NY – A member of the Northeast Community College Board of Governors and a staff member have been recognized by the nation’s community colleges.

Steven Anderson, of Concord, was recognized by the Association of Community College Trustees (ACCT) with its 2018 Western Region Trustee Leadership Award, while Diane Reikofski, board recording secretary and executive assistant to the College president, received ACCT’s 2018 Western Region Professional Board Staff Member Award.

The awards were presented at ACCT’s annual Leadership Congress in New York, NY, recently. Northeast was the only community college to receive two awards at the event.

“Steve Anderson is a successful leader who has seen many changes on the main campus and extended campuses since joining the board in 1997. As he oversees changes such as these, he remains mindful of being a good steward of the taxpayers’ dollars,” said Dirk Petersen, chairperson of the Board of Governors. “He is a dedicated member of the board who is consistent in his support of seeing our students succeed.”

Anderson was initially appointed to a District 3 position on the Northeast Board of Governors in April 1997 and was formally elected to the board in 1998. He was reelected to the seat in 2002, 2006, 2010 and 2014. District 3 includes Dixon and Dakota counties in their entirety and a portion of Cedar County.

In 2017, Anderson was presented with the Nebraska Community College Association’s Governor’s Award. The award is presented annually to one board member from five of the state’s community college areas.

Anderson is the third Northeast board member to earn the ACCT honor. The late John Davies, of Pilger, was named by ACCT as its Western Region Trustee Leadership Award recipient in 2015, while Richard Corkle, of Tilden, received the award in 1984, the first year it was presented.

Dr. Michael Chipps, Northeast president, said Reikofski has been a “guiding, yet gentle force” in her professional service to the College board of governors and his office in her over twenty years at Northeast.

“Diane has a strong working relationship between the board and president to ensure that their work is transcribed accurately in order for it to be distributed publicly and maintained for historical preservation.  She is a true professional and willing to share her knowledge with others.”

“She is well known by the college community for her institutional comprehension recognizing her value as a resource and her willingness to always go the extra mile to provide any assistance she can.”

This is the second consecutive year a Northeast Community College representative has been recognized by the Association of Community College Trustees. In 2017, ACCT presented Chipps its Western Region Chief Executive Officer Award.

ACCT’s Western Region covers 10 states and five Canadian provinces and territories. Geographically, it is the largest of the association’s five regions across North America.

The Association of Community College Trustees is a non-profit educational organization of governing boards, representing more than 6,500 elected and appointed trustees who govern over 1,200 community, technical, and junior colleges in the United States and beyond.