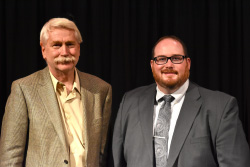 NORFOLK, NE – Northeast Community College has honored two individuals for career success and achievement following graduation from the institution. John Dinkel, of Norfolk, and Isaiah Graham, of St. Paul, were inducted into Northeast's Alumni Hall of Success during a reception and ceremony recently in the Lifelong Learning Center on the Norfolk campus.

The Alumni Hall of Success is awarded to individuals for achieving significant professional success, exhibiting exemplary citizenship qualities or making significant contributions to their communities and/or community affairs.

Dinkel is a 1974 graduate of Northeast, then known as Northeast Technical Community College, where he earned his degree in business administration. He is the president and co-owner of Dinkel Implement in Norfolk and Scribner.

Dinkel is actively involved in his community and finds time to serve on various councils and commissions across the state. Presently, he serves as chairperson of the Board of Directors at Faith Regional Health Services (FRHS). He has also served on a number of FRHS board committees including building, executive, finance, and investment. Dinkel is a member of the Lutheran Hospital Association where he served as board chair in 2007.

He was appointed to the Nebraska Investment Council, which oversees pensions of educators and the Nebraska State Patrol, as well as NEST 529 College Savings Plans. Dinkel is a past member of the Norfolk Public Schools Board of Education. He also served as a building and development committee member during the formation of Lutheran High School Northeast where he also served on the school’s board of directors for nine-years.

Dinkel has been actively engaged in politics with the Nebraska and Madison County Republican parties. He is presently Madison County GOP Committeeman; and served as a delegate at the 2016 Republican National Convention in Cleveland, and was one of 538 Electoral College members during the 2016 presidential election.

He is also active in pro-life issues as a co-founder of Norfolk Area Right Life, as well as with his church, Grace Lutheran, where he has served as co-chairman of the building committee, which oversaw a $1.5 million addition.

Dinkel said Northeast provided him with the foundation for many of the skills he still uses today.

“Northeast provided me with basic business-related skills, such as accounting, that were critical in the operation of Dinkel Implement, as well as personal investments. I am very, very blessed to have been able to do all of the things in my life.”

He was nominated for the honor by Dr. Dan Karmazin, who has a dental practice in Norfolk. He called Dinkel a “well-respected businessman and community leader.”

“Through previous service and continuing involvement, John has impacted not only the Norfolk area, but also across the state of Nebraska. His leadership abilities have shown a talent for consensus building and problem solving. John is a loyal and trusted friend who always shows concern for others.”

She said Dinkel has many attributes including, “Work ethic, high personal standards, thirst for lifelong learning, community involvement, political involvement, and most important of all, relationships. He definitely walks the walk and doesn’t just talk. He is results oriented, community minded, faith-filled and humbly grounded. John is one of a kind. He never forgets his roots and lives his life with gratitude and humility. The world needs more human beings like John Dinkel.”

Dinkel and his wife, Cindy, have four children, Rene Hodges, and Brad, Kelsey and Kendra Dinkel, and seven grandchildren.

Originally from Central City, Graham graduated from Northeast Community College in 2005 with a degree in business management – banking and financial support services. He presently serves as vice president and branch manager of Homestead Bank in St. Paul and Wolbach.

Graham works with companies with incomes ranging from $25 million to $50 million. He performs effective financial analysis and underwriting in the areas of credit, cash flow and collateral. He is considered a consistently top performing sales manager and financial services leader with an established track record of assembling, leading and motivating talented teams of sales professionals to high levels of performance.

Graham is active in the banking industry where he serves as a member of the Nebraska Bankers Association Agriculture Lending Committee, and with the Nebraska/Kansas Schools of Banking Board of Directors.

He was recently appointed to the Nebraska Rural Broadband Task Force which oversees issues related to availability, adoption, and affordability of broadband services in rural areas of Nebraska, which makes recommendations to the Legislature.

Most recently, he was named the Nebraska Future Business Leaders of America 2018 Business Person of the Year, and earned the Difference Maker Award from the Nebraska Bankers Association.

Graham has also received numerous awards through Wells Fargo Corporation, including the Presidential Award of Excellence and Volunteer Service Award. In addition, he was named by the Grand Island Chamber of Commerce as one of its Top 35 under 35.

He also contributes his time to a cause that is special to both he and his wife, Emily. They currently donate and advocate for Molly Bears, a non-profit Virginia-based organization that creates “weighted teddy bears” for families coping with infant loss. In 2014, the couple was successful in lobbying then Governor Dave Heineman to sign a proclamation to have Nebraska observe October as SIDS, Pregnancy and Infant Loss Awareness Month.

Graham said graduating from Northeast Community College demonstrated to him that having a two-year degree instead of a four-year degree does not discount your abilities.

He said, “It allows you to hone the skills you are good at and make them great! It also displayed to me how much instructors really do care about how well their students succeed in the classroom and in life. They follow through to make sure each student gets the attention they need and that they are prepared for any challenge set in front of them. And without coming to Northeast I wouldn’t have achieved my greatest accomplishment and that’s marrying my wife, Emily, (who is also a Northeast graduate) whom I met while attending school here.”

Graham was nominated for the award by Adam Boryca, president of Homestead Bank in Cozad.

He said in his nomination that Graham has distinguished himself in his profession by being a loyal, giving, and caring individual who wants to see results, not only from himself, but from the people in which he surrounds himself.

“When Isaiah started at Homestead Bank, management noticed very quickly the communication skills he possessed. His work ethic showed that he set his goals high and worked very hard to achieve them. The Banker’s Association has also recognized his leadership and communication abilities.”

Boryca said Graham has a personality that is unmatched.

“He knows no strangers and is willing to help everyone. He is a great business leader and even a better friend and family man. Isaiah is the type of individual that any organization would be proud to have represent it as a “Hall of Success recipient.”

The Grahams have two sons, Noah and Jedidiah.

Dinkel and Graham join over 240 other Northeast alumni who have been inducted into the Alumni Hall of Success.