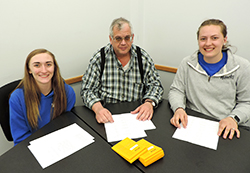 NORFOLK, NE – Mike Roeber has been immersed in livestock judging since his days as a Cass County 4-H’er and Ashland-Greenwood FFA Chapter member. Those experiences led to being a university livestock judging team member, teaching livestock evaluation on the high school level and then serving as the livestock judging coach at Northeast Community College in Norfolk since January 1998.

Northeast’s 2017-18 Livestock Judging Team was made up of seven freshmen and two sophomores.

One of the sophomores was Emily Hausmann, Spencer, who majored in animal science at Northeast. The Lynch High School graduate’s plan is to return to the family ranch and one day own a ranch.

The other sophomore was Karly Jensen, Bloomfield, a Bloomfield High School graduate and an agribusiness major at Northeast. She will be an administrative assistant at the Verdigre Public School.

Future plans for both young women, who graduated from Northeast in May, include expanding their cattle herds.

Jensen said her mother, Vicky (Koops) Jensen, was on Northeast’s livestock judging team for a year while studying for her associate’s degree in veterinary technology.

“My mom encouraged me to give it a try,” said Karly Jensen, who participated in livestock judging while a Bloomfield FFA member.

She said her favorite specie to judge are breeding heifers – “not bulls!”

Being on the judging team, she said, meant “getting to see different livestock and making memories with friends.”

What does it take to excel at livestock judging? Hausmann’s answer: “A lot of practice.” Jensen said: “Getting experience.”

Through her team experiences, Hausmann said she has learned time management, being able to think on her feet and communication skills.

Jensen said a plus to being on Northeast’s livestock judging team was meeting students from across the country at competitions and developing friendships.

Roeber said freshmen team members travel with the sophomore members to the non-major contests with sophomores vying on the full judging circuit. The sophomores log about 15,000 miles over the school year.

In addition to on-road competitions, the teams also are involved in several activities.

For the past 33 years, members have assisted with the open Northeast Community College Livestock Classic Steer and Heifer Show hosted by Northeast for 4-H and FFA members over Thanksgiving weekend. It’s the team’s main fundraiser, Roeber said.

The rural Ashland native said he “really got into livestock judging” as a 4-H’er, learning to present oral reasons as a high school junior. Roeber said he diligently perfected his livestock evaluation skills and won his county’s overall 4-H livestock judging title following his senior year. He also judged livestock as an Ashland-Greenwood FFA member.

Of that time, he said, “I enjoyed livestock judging, but I didn’t know if I’d make a career of it.”

He entered the University of Nebraska-Lincoln, majoring in both animal science and agricultural education. One of his animal science degree requirements was taking a livestock judging class. The spring of his junior year, Roeber joined the UNL Livestock Judging Team.

He spent that semester and his senior year at competitions where he has now taken his Northeast students for years.

As a coach, Roeber said, “I always try to teach life skills along the way. I try to make a difference in their lives, not only as team members, but also being a better person, a better citizen, a better worker, whatever the case may be.”

Northeast has annually fielded a livestock judging team since its debut in 1994. It’s proven an excellent recruitment tool for the college, he said.

“Out on the road, we’re representing Northeast,” Roeber said. “We’re always in front of potential students. You never know what might lead a student to come here (Northeast).”