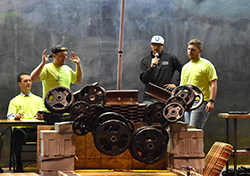 NORFOLK, NE – When Austin Berg was asked if he named his bridge to compete in Northeast Community College’s annual drafting program’s bridge competition recently, he said he did not have one. When someone suggested “Beefy,” well, the name seemed to fit. While Berg’s bridge did not literally shatter into pieces, it figuratively crushed the previous record in the competition, now in its 11th year.

Berg’s 3.78-pound bridge of popsicle sticks, glue and fish line held 385.06 times its weight; balancing 1,456 pounds of free weights and sections of railroad track before half of the weight fell off. While the bridge sustained minor cracking from falling weights, it remained intact at the end of the competition. The victory puts Berg, Austin, TX, first on the competition’s all-time list, breaking the previous record that was held by Adam Krueger, Plainview, whose 2.31-pound bridge held 630 pounds, or 272 times its own weight in 2013.

Berg was one of 12, second year drafting students to take part in this year’s competition. He received $200 and a certificate from the Nucor Detailing Center. The extra $100 was added when he set the record.

Holcomb said the students created blueprints for their bridges and then constructed them.

“A lot of hard work goes into actually making a structure four-foot long and nine-inches wide out of popsicle sticks,” he said. “It’s really about the drawings … having them actually drawing it out and then build what they’re drawing to. This is a lot harder than it looks.”

Holcomb said for each student to earn a grade of A on the day, their bridge had to hold 50 times its weight.

“For example, If the bridge weighs two-pounds, it has to hold 100-pounds in order for the student to get an ‘A.’ Anything above the 50-times ratio is purely for bragging rights in the competition.”

All students in the competition earned the top grade.

If the students chose to go the extra distance and not take their bridges home intact, they could go for the record, which they all attempted.

In addition to Berg, Licea and Hernandez, Joshua Gnat, Pierce, Tyler Ritter, West Point, Isaac Pfeifer, Norfolk, and Dallas Bruning Edgar, made it on to the Top 20 record list, which goes back seven-years. Seven students entered the Top 20 last year as well. Records were not kept in the early years of the annual competition.

Holcomb credits Brad Vogt, information technology instructor, with developing a system that allows for instantaneous information to be entered that calculates the bridge-weight ratio and compare the information to other bridges that have competed since records have been chronicled.

The competition was held in Cox Activity Center Theatre on Northeast’s Norfolk campus. The popularity of the competition has allowed the event to move to larger areas over the past few years. It was originally held in one of the drafting program’s classrooms in the Maclay building and later moved to the theatre in the Cox Activities Center. It has also been held outside in Paradise Courtyard in recent years.

Northeast offers an architectural, structural and mechanical drafting programs, where students learn to design residential, commercial structures and machine parts using two-dimensional and three-dimensional CAD (Computer Aided Design) software. Students are trained to develop detailed working drawings for use in manufacturing and industrial facilities. Drafting is offered on the Norfolk campus and at Northeast’s extended campus in South Sioux City.

Students in the Northeast media arts program streamed the annual bridge competition live on KHWK TV on CableOne Channel 20. The rebroadcast may be seen on the Northeast Community College Broadcasting YouTube page.

Northeast Community College drafting student Austin Berg (right) watches as weight begins to fall from his popsicle stick-built bridge during a competition recently on the Norfolk campus. Berg, Austin TX, set an all-time record in the competition after his 3.78-pound bridge of popsicle sticks and glue held 385.06 times its weight; balancing 1,456 pounds of free weights and sections of railroad track before half of the weight fell off. Seven of this year 12 competitors landed on the competition’s all-time Top 20 list.