Conversation at Northeast focuses on recruiting young professionals to the region 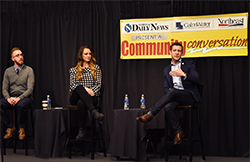 NORFOLK, NE – The region served by Northeast Community College is no different than many parts of the country when it comes to workforce and economic vitality. While some progress has been seen in attracting and retaining young professionals to the region, local officials say more can be done. The issue was the subject of a “Community Conversation” recently at the College.

“With a continuous unemployment rate under three-percent we don’t have the workers here, so we need to attract a younger workforce that is going to want to get into some of these leadership positions,” said Brittnay Dawson, director of talent, development and recruitment at the Norfolk Area Chamber of Commerce. “What we have learned is that bringing (young professionals) is only one part of it. The bigger issue is how are we going to get them engaged and what it’s going to take keep them here for the long haul?”

Dawson was joined on the panel by Nebraska State Senator Adam Morfeld, of Lincoln, and Jeff Skalberg, a Norfolk native, who is director of donor engagement for the United Way of the Midlands in Omaha.

Morfeld, founder and executive director of Civic Nebraska and a member of the Lincoln Young Professionals, represents a section of the capitol city that ranges from college students to retirees to immigrants. He said Civic Nebraska is designed to get young people better engaged with their communities.

“We want to create the next generation of young Nebraska leaders and hopefully get them better connected with their community,” he said.

Morfeld said collaboration is an important component to attracting these individuals. He said one way that can be accomplished is by creating collaborative co-working spaces for entrepreneurs. He said another area that is being addressed in Lincoln, but not as fast in smaller communities, is placing younger people in positions of real power.

“You have to really legitimately give young people a say and a stake in the community. And if you do that, they are more likely to stay in that community.”

Skalberg, a graduate of Northeast Community College, indicated the same can be said about positions of influence in business. He described one of his first jobs as “transactional.”

“It wasn’t inspiring, it wasn’t engaging, they didn’t promote engagement and we worked in teams and we didn’t even know who each other were. If I come into the workforce and are not allowed to be creative or allowed to make change, then I’ll leave pretty quickly.”

Dawson said the Chamber has begun a local organization called Connect, which she co-sponsors with Jarad Dahlkoetter, the Chamber’s event director and the newest member of the Norfolk City Council. She said the group focuses on young professionals to get them to step up, get engaged, and connect with other young professionals in the community.

Gabe Steinmeyer, director of economic development in the City of Neligh, said the region must collaborate in order to be successful in recruitment.

“We really do believe that we need to succeed as a region and grow as a region. That’s why I’m here…to hear what’s happening in Norfolk and to work with Northeast Community College. The Norfolk Now.org is a great opportunity for our community to work with the other communities here in order to get the area to really grow.”

Steinmeyer said one of the biggest issues that has been identified in Neligh is the increase need for recreational activities for young professionals. He said the younger generation doesn’t always look at a job prospect first - they look at the community and the area in which they want to live and then they find a job.

“Because they really value the quality of life and the living experience, more than the paycheck,” he said.

Norfolk Mayor Josh Moenning said this conversation is important in terms of where the city needs to target its focus, strategic planning and long term investment. He said Norfolk presently has more jobs than it has people to fill them.

In addition, Moenning said the city needs to look at what makes the community attractive.

“As a city, we are starting to prioritize cultural amenities, expanding our downtown, opening up the riverfront, really trying to enhance recreation and entertainment options. From the things that we have been hearing, those are a lot of the things young people are looking for.”

Morfeld said higher education plays a crucial role in workforce development. He said every time he speaks with business owners across Nebraska, the workforce and retaining young talent is always the number one issue, followed by taxes and regulations.

“It’s going to be tougher and tougher to keep people, not just in Lincoln and Omaha, but also in Greater Nebraska. Making sure we’re investing in our community colleges, our state college system and our university system is going to be critical to making sure that we’re competitive and that we keep people here. Other than our ag commodities, our number one export is young people in our state.”

Another matter that the region struggles with is embracing diversity. Morfeld said that issue is hindering many people from moving to Nebraska.

The District 46 lawmaker said instead of waiting for any type of government action, businesses can implement these types of policies in the workplace, which can also serve as an attractive recruiting tool.

The audience at the Community Conversation was made up of several millennials. One woman said she and her husband, who moved back to Norfolk because of family, want to stay.

“We took major pay cuts to come back to live here. Engagement is truly what I think is keeping us here along with our family which is really close. I am truly thankful for this community. I honestly thought we would move back here for two years, get our family fix and actually leave, but that’s not the case.”

Another woman who works from her home for an out-of-state company said local businesses need to do a better job of describing job descriptions that are often left out.

“They don’t talk about anything other than health insurance, paid time off and what your actual pay is going to be. If you’re getting paid $40,000, but all of your benefits add up to $12,000 extra, that’s a huge benefit.”

The conversation also delved into creating more attractive incentives that would lure additional young professionals to the region, including the establishment of mentorships, flex time in their jobs and even unlimited vacation, which has been implemented by some businesses and organizations in Omaha and Lincoln and in other parts of the country.

The Community Conversation was sponsored by the Norfolk Daily News, Calmwater Financial and Northeast Community College.

Nebraska State Senator Adam Morfeld (right) speaks during a Community Conversation at Northeast Community College regarding the recruitment and retainment of young professionals to Nebraska. Looking on are Jeff Skalberg, of Omaha, and Brittnay Dawson, of Norfolk.