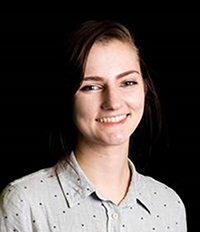 DES MOINES, IA – Northeast Community College theatre students had the opportunity to participate in an event that encourages, recognizes, and celebrates the finest and most diverse work produced in university and college theater programs.

Peterson said the festival included a number of workshops and other opportunities for his students.

“We also had the chance to be invited to productions, which represented the best examples of college theatre from the prior year. These productions are selected by respondents who travel to various college and university productions and provide feedback.”

Peterson served as a festival respondent where he most recently responded to the production of “Shakespeare’s Dog” by the University of Nebraska-Omaha. A respondent's job is similar to that of a reviewer and respond to what he/she experienced in the theatre at the time of the viewing of a production.

Northeast Community College has been given a response for every one of its college productions over the past six years and has earned commendations in lighting, sound and scenic design. The student production of “On Ego” was a finalist at the festival in 2015.

At the 2018 festival in Des Moines, Sadie Johanson, of Pierce, earned a commendation for achievement in scenic design for Northeast’s student production of “The Assassin’s Duet.”

The KCACTF, which began in 1969 by Roger L. Stevens, the Kennedy Center's founding chairman, is an annual national theater program involving 20,000 students from colleges and universities nationwide. For 47 years, the organization has served as a catalyst in improving the quality of college theater in the United States. KCACTF has grown into a network of more than 700 academic institutions throughout the country.

Peterson said the festival is an eye opening event for college students who want to pursue theatre.

“All of the workshops are instructed by professors in the region and professionals in the field. I can give my students introductions to concepts here, but at the festival, they can dig deeper in these workshops. They also had opportunities to take part in other activities during the week, such as the 24-Hour Play Festival or the design-intensive workshop which takes place over a few days. They could hone in on whatever their specific interest may be.”