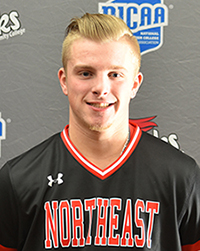 AMES, IA – A member of Northeast Community College baseball team has earned honors during the first week of the season.

As baseball is a new sport to Northeast, Smith, a freshman right fielder from Elkhorn, had the good fortune to be the first player in school history to record a base hit.

Competing against Hesston College this past weekend, Smith averaged .667 in three games. He recorded two doubles along with five RBI’s as the Hawks went 2-1 to start its inaugural season, including a 12-10 win in the team’s first ever game.

The Hawks will be in action this weekend when its travels to Concordia, KS, for two doubleheaders against Cloud County Community College. Games on Saturday and Sunday begin at 1 p.m.