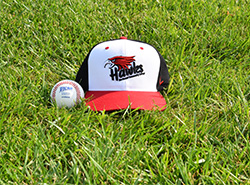 The Hawks scored four runs in the sixth and three each in the second and seventh innings to earn its second win of the young season. The two teams split a doubleheader on Friday, which marked the first games ever for Northeast’s baseball program.

On Saturday, Christian Dumont led the Hawks in going 3-for-4 in scoring three runs and brought in two RBI’s while Bryce Walker was also 3-for-4 with two runs and one RBI.

Alex Fetters pitched six innings to pick up the win, while Dylan Nicholson pitched the final inning for the save.

Northeast (2-1) will travel to Concordia, KS, for a weekend series against Cloud County Community College. The two teams will play doubleheaders on Saturday and Sunday, February 17 and 18, with games starting at 1 p.m. on both days.