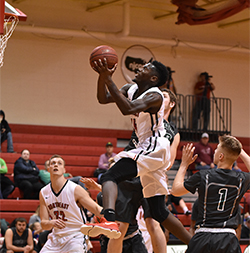 Steve Wooten led Northeast with 28 points, nine rebounds, and two assists. Melkisedek Moreaux added a double-double of his own with 17 points and 13 rebounds, along with four blocks and four steals. Jaquan Sanders finished with 14 points and five assists. Allen Anderson had 12 points and six assists on the night.

The Hawks (13-10) will be back in action this Saturday when it travels to Council Bluffs, IA, to take on Iowa Western in a 7 p.m. game.

Melkisedek Moreaux (34), of Northeast Community College, drives the lane to score two of his 17-points in against Central Community College Wednesday in the Cox Activities Center on the Northeast campus in Norfolk. The Hawks defeated the Raiders 93-85.