Petersen is new chairperson of Board of Governors 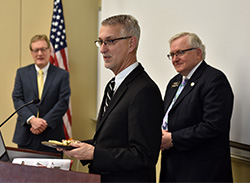 NORFOLK, NE – Dirk Petersen is the new chairperson of the Northeast Community College Board of Governors. He began serving his term at Wednesday’s meeting of the board in Norfolk.

Petersen, retired vice president/general manager of Nucor Steel Corp., was appointed to the Board of Governors in 2011 to fill an unexpired term. He was elected in 2012 and re-elected in 2016. He previously served as board vice chairperson in 2017 and secretary in 2016. Petersen chaired the board’s facilities committee in 2012, 2014, 2015 and 2017; human resources committee in 2013; and governance committee in 2016.

Also at Thursday’s meeting, Anderson and Shirley Petsche, of Petersburg, were selected as representatives to the Nebraska Community College Association Board.

Dr. Terry Nelson, of West Point, (center) former chairperson of the Northeast Community College Board of Governors, thanks College faculty and staff for their hard work and dedication as he prepares to hand over the chairmanship of the board to Dirk Petersen, of Norfolk, (left). Also looking on is Dr. Michael Chipps, Northeast president.