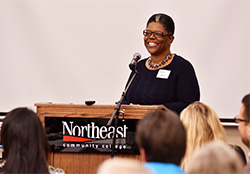 NORFOLK, NE – Area residents gathered on Monday to celebrate the legacy of the Reverend Dr. Martin Luther King, Jr., on what would have been the late civil right leader’s 89th birthday.

At an inaugural breakfast at Northeast Community College to observe the occasion, Vickie Young, president of the NAACP Chapter in Omaha, said based on the talk that she heard and the makeup of the audience she was speaking to, there is still work to do in order to achieve King’s dream of equality.

“I’m hoping that for the second annual MLK Breakfast that we have some folks that look like me….because
I know that we’re here. “We have to do a better job of establishing race relations here, not just at this college, not just in this city, but in the state of Nebraska. Come next year (at this event) I want to see the true diversity of Norfolk. I know that it exists.”

This wasn’t Young first visit to the city. She was in Norfolk three years ago as part of an investigation after complaints were lodged over a controversial float in the city’s annual Independence Day celebration. She said she is hopeful because of the dialogue that is taking place with new leadership in Norfolk that is identifying strategies and resources to promote inclusion in order to make the city a better place.

Dr. Michael Chipps, president of Northeast, said the College’s work in the global arena is designed to purposely bring together people from various cultures, this includes students on campus from over 20 countries.

“It is important that Northeast Community College establish a culture that continues to draw diversity together, rather than separate us,” he said. “One thing we are doing is expanding our global outreach with our faculty and students. We are welcoming people from around the globe to study at Northeast and sending students and faculty to other parts of the world to gain a richer understanding of people around the globe.”

“Today is the celebration of a legacy that we all respect and honor together,” Moenning said. “The purpose of the Diversity Council is to create a platform for equality, for inclusion, for engagement for the sake of making our community better and stronger for all of its citizens.”

“Unity is the combination of ideas, visions and joining together for the betterment of the greater good,” she said. “Continue to deal with strong relationships with businesses and organizations. Continue to emphasize the importance of diversity and inclusion…. and engage the minority community! Those are the goals of the (mayor’s) diversity council and I am here to help them make that happen. I am asking the rest of Norfolk and all of you here to (also) help make that happen.”